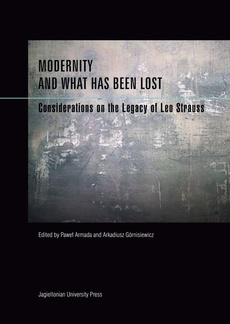 Modernity and What Has Been Lost. Considerations on the Legacy of Leo Strauss

The title of this volume appears to suggest that modernity is somehow devoid of something of utmost importance. Sixteen years after the death of Leo Strauss, certainly one of the most profound thinkers in the twentieth century, the model of liberal democracy has been declared victorious, not to say final and true. Due to unrestrained acceptance of such a perspective, a real tension between human beings disappears as there is only one way of being “correct”. Having taken it into consideration, we point toward something that goes beyond the discussion about the pros and cons of liberal democracy. It would be presumptuous to believe that the current embrace of the liberal-democratic model of culture has definitely settled the question, “How to live?” And if modernity threatens to silence this most important question, or to neglect its importance as seen by common sense, it seems all the more important to show that the contemporary answers fall short of being self-evident.

Religie a wojna i terroryzm

From Cotton and Smoke: Łódź - Industrial...

The city greeted newcomers with mysterious “characteristic, dirty fog on the horizon, which constantly hangs above the capital of chimneys.” Directly after arrival “the smoke wrapped [newcomers] in some impenetrable, due to its sultriness,... więcej >

And Still I Cheat the Gallows

A series of stories telling about the graceful crimes of a high class robber, a forger, a robber, a murderer. Stories in each of which are the same criminal, but under different names travels around the world, assuming new identities, avoiding... więcej >

Learner`s Dictionary for Student and...

e-ISBN: 978-83-233-8439-7European Union as a whole. Public health professionals have to cooperate across borders, using mainly English as a means of both face to face communication and information dissemination. As a resułt, there has been a... więcej >

Arguments and Counter-Arguments. The...