The OSCE had taken substantial steps in recent years to address tran-snational threats (TNTs), including Permanent Council decisions on policing, counter-terrorism activities, counter-narcotics activities, and information and communication technologies (ICTs). In this light it shall be stressed the im-portance of the OSCE’s comprehensive approach to security and acknowl-edged the OSCE as a vitally useful platform for addressing transnational threats e.g. the OSCE-wide range activities on counter-terrorism that have been important instruments of confidence-building between border experts.
Threats such as terrorism, radicalism, or the illicit trafficking in arms, drugs and human beings had similar roots: dysfunctional State structures (with a lack of political will or capacity to combat transnational threats), social division, and economic inequalities. Organized crime in particular inflicted damage to the social fabric and the healthy functioning of legitimate econo-mies.
Effective border management continues to represent a priority for the OSCE participating States and partners. Effective border management and security play a critical role in combating TNTs, and therefore the OSCE shall further develop its already significant expertise in this area. Organized crime is also highlighted as particularly damaging to security and stability through-out the OSCE area. Consequently, it is recommended that OSCE should become more active as a platform for regional co-operation on issues re-lated to organized crime. There is considerable support for strengthening the OSCE’s role as a regional arrangement under Chapter VIII of the UN Charter and for deepening strategic partnerships on combating TNTs with OSCE Partners for Co-operation and also with other relevant international and regional organizations, academic institutions, civil society and the pri-vate sector.
The evolving threat of international terrorism is seen as a significant con-cern. OSCE efforts to meet this challenge should include closer involvement and co-operation with civil society and the private sector, while ensuring re-spect for human rights and fundamental freedoms. Further areas of concern were related to the growing threat posed by foreign fighters and incidents involving kidnapping for ransom.
International efforts are essential to tackling transnational threats. Com-plementary co-ordination with other relevant actors, including not only the relevant international, regional and subregional organizations but also civil society, academic think-tanks, NGOs and the private sector, is crucial to achieving effective progress in combating transnational threats.
The OSCE’s work on addressing TNTs has a particular added value because its projects and programmes often display unique features that make use of the OSCE’s specific expertise and capacities and its compre-hensive approach to security in all three dimensions, including the human dimension.
The BMSC draws attention to the countries within the OSCE area that face numerous border security related challenges. These include difficult and long trade and transit routes, border disputes and unsolved border de-limitation and demarcation, threats of trans-national terrorism, illicit drug and small arms and light weapons trafficking across the borders and differing levels of access to natural resources. Trafficking and smuggling of human beings as well as irregular migration and labour are also concerns in multi-ethnic border regions. Trafficking in narcotics originating from Afghanistan, and in pre-cursor chemicals, is significant and has become increasingly sophisticated and diversified. UNODC assesses that well-developed cross-border transportation and porous borders have made Central Asia one of the most attractive routes for the smuggling of Afghan drugs. This impos-es significant challenges on law-enforcement personnel, including those of border management agencies. The withdrawal of foreign combat troops from Afghanistan by the end of 2014 and assumption of overall responsibil-ity for its security, including borders, by Afghanistan security forces, is also regarded as presenting particular challenges given the on-going insurgency and in-accessibility of parts of the border.
We invite you dear Reader and encourage you to study this book very carefully, to draw your own conclusions in order to build, develop, change and shape your security environment.

The main aim of the book is to depict the transformations that are taking place within different form of family in comparative perspective. Interest in the family is extremely alive and widespread now. In the time of intensive transformations family... więcej >

Contemporary organizations operate in an increasingly turbulent environment that generates not only predictable changes, but also “black swans”. Winning organisations must be agile, flexible and constantly learning. Changes in the management... więcej >

The reader receives competent and detailed analyses reffering to the party systems of Central European countries: Poland, the Czech Republic, Slovakia, and Hungary. The authors present, in a cohesive, yet detailed way, crucial trends in the shaping... więcej > 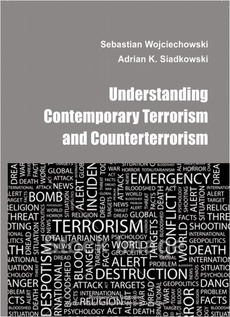