Łukasz Kulesa
What Future for NATO after 2014?
When the concept of the current issue of The Polish Quarterly was first formulated, the end of the ISAF operation in 2014 was universally assumed to become the main point of reference for discussions about the future of NATO. Some argued that the alliance would be faced with an almost existential crisis of finding the next unifying cause after the end of the extensive out of area deployments. The Secretary General spoke eloquently about the upcoming transition from a “deployed” to a “prepared” NATO, but it remained unclear what exactly the post-2014 alliance should be preparing itself for. Most Central Europeans called for NATO to “come home” and cultivate its core collective defence task, while others noted that global developments would very soon force the alliance into initiating out of area actions again.

Magnus Nordenman
NATO beyond Afghanistan: A U.S. View on the ISAF Mission and the Future of the Alliance
Many in Washington have drawn the conclusion that NATO largely failed in Afghanistan, in no small part due to insufficient political will in Europe coupled with lacklustre military capabilities and forces contributed by America’s NATO allies. However, on closer examination, this conclusion about America’s European allies appears hasty. Indeed, European nations have exhibited a surprising level of political will, considering the circumstances, and the Afghanistan mission has generated a major, and sometimes painful, transformation of European forces towards a more expeditionary construct. This is precisely what Washington has sought from its allies in Europe since the end of the Cold War.

Eric Sangar
The German Bundeswehr after Afghanistan: A Return to Which “Normality?”
This paper aims at shedding some light on the impact of the ISAF mission on the German armed forces. First, a short overview of the essential operational and strategic dynamics of the Bundeswehr’s ISAF deployment between 2003 and 2013 will be presented. Then, some of the resulting changes in operational design and military discourses are presented, including the perceived need for a “return” to classical war-fighting capabilities. Related to this, the third section presents some fundamental influences on the future of the Bundeswehr, including the impact on force evolution and organisational identity. In the conclusion, a few resulting consequences for the future shape of German security policy are discussed.

Asta Maskaliūnaitė
Learning to Think Big: The Lithuanian Experience of the ISAF
This article presents a brief overview the Lithuanian experience in the ISAF and describes the main lessons learned for the Lithuanian armed forces and civilian participants in the operation. As a part of the ISAF, Lithuania took it upon itself to lead one of the Provincial Reconstruction Teams (PRT) in Afghanistan, which proved to be the most challenging but also the most experience-developing activity of the young military establishment. Therefore, this paper will pay much attention to precisely this part of the mission.

Holger Mölder
Estonia and the ISAF: Lessons Learned and Future Prospects
The following chapters analyse the background of Estonia’s decision to join the military operation of Afghanistan, its links to Estonian society and political elites, but also a possible influence of the Afghanistan experience on the post-ISAF NATO. This article argues that the Afghanistan experience has offered two basic lessons to be learned by Estonia in framing its understanding of crisis management: 1) Estonia’s military achieved valuable combat experience against a “live” enemy; 2) our political elites learned the importance of post-conflict state-building, that civil support to state-building in the post-conflict situation is no less important than a military contribution.

Michał Piekarski
A Story of Change: Poland’s Armed Forces and the ISAF Operation in Afghanistan
Have there been any changes in Poland’s security policy, doctrines or armed forces that are connected to the operation in Afghanistan? If the answer is yes, and available information clearly indicates that it is, what are those changes? Are they positive? Negative? Can we say, after a long “Afghanistan experience,” that the Polish armed forces are better prepared to conduct operations in the contemporary security environment?

Milan Šuplata
What Kind of Slovakia for NATO?
Today, when NATO’s principle of collective defence has regained importance, we find ourselves “in,” but “without.” We all know what needs to be done and what would be a security gamble. We have to make the necessary strategic decisions, instead of turning a blind eye to our already collapsing armed forces and fading good name.

Péter Wagner, Péter Marton
The Hungarian Military and the War on Terror
A very important effect of the Iraq and Afghanistan missions is that more soldiers than ever before have acquired experience in a NATO or other international environment during these years. Although Hungary was represented in battalion strength in the missions of the 1990s, these missions, by their nature, necessitated only low-intensity contact with other allied forces. Tasks in Afghanistan required much more transparent and comprehensive cooperation with an entire coalition of countries and a host of other players. At any one time, about a quarter of the mission personnel were engaged in individual assignments, which meant that they were working in a foreign-language environment 24 hours a day. Since 2003, but especially since 2006, hundreds of Hungarian soldiers have experienced the culture of international cooperation, and this has certainly affected their professional knowledge and overall attitude. 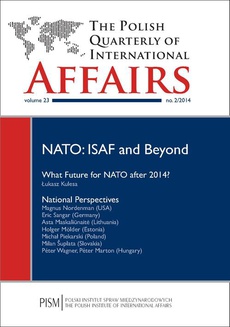