In years 1839-1842 Richard Wagner failed to put any of his operas in Paris and the greatest successes achieved as an author of texts about music – essays, reviews and stories - published in “La Revue et Gazette musicale de Paris”. The author extensively presents and comments those texts.

During the second, longer Wagner’s visit in Paris, 1859-1861, two events, crucial for reception of his works on the Seine, happened: three concerts in Théâtre-Italien (25 Jan, 1 and 8 Feb 1860), during which the orchestra under the direction of Wagner performed excerpts from his operas, and the loud Paris Tannhäuser premiere, preceded by 164 rehearsals. Those artistic events, audience reaction (including famous provocation of Jockey Club members, which was the main reason for Tannhäuser’s disaster) and violent press polemics, that followed on, are discussed in Les concerts au Théâtre-Italien and Tannhäuser à Paris sections.

While Wagner was living, only one another opera of his authorship was put in Paris: Rienzi. To its premiere, 6 Apr 1869, and heated press debate, which followed on, refers the chapter Vers la deuxiéme premiére parisienne. Perhaps after Rienzi another Wagner’s premieres would have occured, especially much awaited Lohengrina, had it been not for French-German relationship rapid worsening at the beginning of 70s, French-Prussian war in 1870-1871 and not of a highest caliber work Une Capitulation, which Wagner created reffering to that war and which, soon widespread in French language, hurt Frenchmen badly. Discussion about this work and resulting from it anti-wagner mood in France in 70s and at the beginning of 80s of the XIXth century is contained in chapter Une Capitulation.

As from 1850, since the first performance of Wagner’s composition (overture to Tannhäuser), German composer had in France, apart from many adversaries, calling him ironically the musician of the future, also his admirers. In the study the origins of French Wagnerism are described, which are connected with such personas like Léon Leroy, Gérard de Nerval, Théophile Gautier, Jules Champfleury, Charles Baudelaire, Catulle Mendès or Judith Gautier. The great admirer of Wagner music was also conductor Jules Pasdeloup. The Sundays orchestral concerts of Jules Pasdeloup and, later in 80s, of Charles Lamoureux and Edouard Colonne had a great impact on Wagner’s work popularization in 60s, 70s, and 80s. This matter is presented in the last chapter entitled Wagner aux concerts parisiens.

Richard Swineshead’s short treatises (opuscula) on motion provide us with a direct insight into the successive stages in the fourteenth-century Oxford speculative, mathematical science of local motion not only token generally, but also with... więcej >

We begin our acquaintance with history with a quarrel between Henry and Norfolk. And where would be a fight for life and death – but no, not destiny! Richard, having his own reasoning, stops the beginning of the battle and expels both! After the... więcej >

Heroes of the work are ready for terrible deeds for the sake of power. Richard is a model of canonical evil, almost a fairy-tale villain, in whom there is nothing light. The main character goes to power through numerous crimes and deceptions. He... więcej > 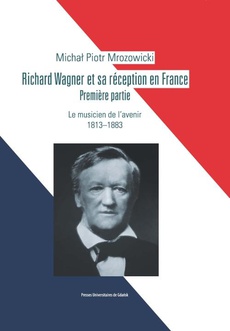