"I`m a rebel and I rebel a lot". English work stress and its use by Polish advanced learners of English.

The subject of the monograph deals with various strategies used by advanced non-native Polish advanced learners of English while indicating word stress and its position withi mulitiple syllable English words.

The first chapter is entirely devoted to the theoretical aspects of English phonetics related to the topic. It is divided into four sections: in the first one, the syllable and its essence are thoroughly analyzed: structure, syllable division and syllable analysis in terms of strong (heavy) and weak syllables. The second section presents the definition of the stress word in English along with the essence of its variability and the three levels of stress: main stress, minor stress and no stress. The next section of the chapter is devoted to the word stress position within specific words: simple (one and two-syllable words) and complex (three-syllable and longer words). The last section is an attempt to determine a possible correlation between the structure of the syllable and the word stress pattern.

In the second chapter, English word stress is presented from the perspective of Poles learning English as theri second language (L2). Similarly to the previous chapter, this chapter also consists of four sections. The first one is an analysis of English word stress from a phonological perspective and describes the three most important aspects: the stress within the syllable and its severity, as well as the phenomenon of vowel reduction. The second section is devoted to syllables in Polish: the essence of defining boundaries within one syllable as well as between different syllables in a given word is specified. The third section focuses on the essence of word stress in Polish: three types of stress (rhythmic, dynamic, melodic) and the main rules governing word stress in Polish. The fourth section of this chapter tries to organize some general tendencies in the process of determining the placement of word stress in the English language, seen from the perspective of suffixes and compound words (nouns, verbs and adjectives).

The third chapter focuses mainly on the theory of Second Language Acquisition and its theoretical assumptions in practice. This chapter is divided into two sections. The first - more extensive - is devoted to the theory of acquiring English as a foreign language. The role of both mother tongue (L1) and foreign language (L2) in the SLA process is taken into account. Here, the so-called 'Interlanguage' - including linguistic errors resulting from the continuous development of learners' linguistic skills, as well as errors resulting from the transfer of various rules or rules from the mother tongue to the ground of a foreign language – plays a very important role.
In addition, the chapter contains the theories and models of SLA most relevant to the topic of the monograph, as well as the role of mother tongue phonology in foreign language acquisition. The second section of the chapter describes two studies related to word stress carried out on Poles learning English by J. Archibald in 1998 and E. Waniek-Klimczak in 2002.
The last chapter of this monograph describes the study carried out at the Institute of English Studies at the University of Łódź with the participation of students of the first, second and fifth year of English philology. The chapter provides an exhaustive description of the study: its main objectives, hypotheses and assumptions, methods, participants, procedurę, results obtained and conclusions drawn from the analysis of the results. It is worth mentioning that the results were divided into three additional subsections - each of them corresponds to the theses made at the beginning of the study and the research goals.

The analysis of the results shows that students use various strategies to indicate stress in polysyllabic words. The two most common ones are generalizing (based on the part of speech represented by a given word) and linguistic transfer (shifting the Polish accent - falling on the penultimate syllable - onto the ground of English). The study also indicates that the level of language proficiency is not a decisive factor in the correct indication of the word stress (slight differences between second and fifth year students of English philology). Comparing all the groups with each other, it can also be concluded that the instructions and rules learned by students during phonetics classes turned out to be helpful in indicating word stress position (it is especially visible in case of the first and second year students).

Socio-psychological factors and their...

The Reduced Glutathione Level and... 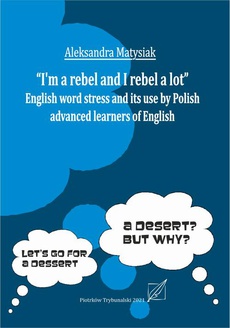 "I`m a rebel and I rebel a lot". English work stress and its use by Polish advanced learners of English.