A very entertaining compilation of true-life stories in Poland during the last three decades of the 20th Century that are captivating, intriguing, humorous, emotional, and remarkably entertaining.

Memoirs which cover three decades of the second half of the twentieth century, and the first years of the new millennium. Private life of the people in their thirties, their ways to earn money abroad and in Poland, their family ties, and their loved ones. The book describes the changes Poland underwent in the decades from the 1970-ties to the turn of the century.

The principal characters include the authoress and her friends, many of whom she has known since her childhood, their boyfriends and families. The historical background describes the birth of the Solidarity movement, martial law, and the peaceful transition from communism to democracy in Poland.

The real-life episodes include many funny situations. They describe our efforts to earn enough money to buy a new car, a Fiat 126 p, which was a great challenge in those days, turning one gas ration card per buyer into a thick pack which supported our driving free as often as we wished and as far as we needed, and a variety of jobs we did to get paid in "real" money" abroad.

The countries we found seasonal jobs in included Sweden, Switzerland and England. One of us worked in the USA. Fortunately, working abroad did not mean "sweat and tears" only. It also gave us a lot of opportunities to do the sightseeing and visit many places of interest and tourist attractions. It happened in Sweden, thanks to picture selling business, for example.(level B2/C1)

Even bad times are good

Even bad times are good

I enjoyed reading "Even the Bad Times Are Good” by Zofia Puszkarow and in my opinion, this author has created a very entertaining compilation of true-life stories in Poland during the last three decades of the 20th Century that are captivating,... więcej >

Five StarsI enjoyed reading "Even the Bad Times Are Good” and in my opinion, this author has created a very entertaining compilation of true-life stories in Poland during the last three decades of the 20th Century that are captivating, intriguing,... więcej >

Get Even - Osiągnięcia i trofea - poradnik...

Get Even - poradnik do gry 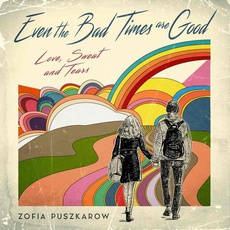