Dear Reader,
It has become quite fashionable, and arguably correct, to dispute Francis Fukuyama’s
theory that the collapse of the Soviet Union brought about the end of history.
Anyone interested in Central and Eastern Europe understands that this region
is far from monolithic, also in the implementation (or lack thereof) of western economic
and political systems. At the same time we cannot deny that there is something
idiosyncratic about the former Soviet bloc, something which links its societies
together. Either through common experience or history (or both).
We address this phenomenon in this issue roughly using the term Homo postsovieticus.
It allows our authors to talk about the legacy of the socialist past which,
as they argue, has not yet fully disappeared. Its traces can be found throughout the
region and shape the lives of its many people. These traces have been captured by
a group of photographers who collectively call themselves the Sputnik group (not to
be confused with the pro-Kremlin Sputnik media). Their unique project is presented
by Wojciech Górecki in the opening essay to this issue and is accompanied by some
of their illustrative photographs.
In addition, we tackle the issue of the incomplete system transformation which,
in many cases, has allowed for a creation of hybrid socio-economic systems. They
may, like in Georgia as discussed by Kaja Puto, be a result of a hasty reconstruction
of the state to look more like what is believed to be the West. Or, as is the case of
Belarus, which is analysed by Maxim Rust, reveal a slower emergence of collective
identity that is both submissive and open, passive and entrepreneurial.
In the case of post-Maidan Ukraine, where without a doubt the transformation
has gone much further, the rooting of the western value system is also still under
way. As we can see from Andriy Lyubka and Nina Boichenko’s texts the possible
risks of its interruption cannot be ignored.
Additionally, in this issue we have prepared two special sections: the first one,
published on the 500-year anniversary of Martin Luther’s Ninety-five Theses, debates
the legacy of the Reformation from our region’s standpoint, while the second, at
the end of the issue, is dedicated to Joseph Conrad – a Polish-born writer whose
masterpieces have been read and studied throughout the world for generations.
Our authors take a new look at Conrad, his influences and how his works are still
very relevant in 2017.
Lastly, we are pleased to announce that in the autumn of this year New Eastern
Europe will be launching a new website. It will provide new features to subscribers,
who will not only be able to access our digital archive, but also read each text from
the issue online via their web browser.
We invite you to take a look and join us online at: www.neweasterneurope.eu
The Editors

In the collection „New Arabian Nights”, the descriptions of the adventures of the fantastic prince of Bohemia are replaced by the mysterious atmosphere of the „Pavilion on the Hill”, vivid pictures of medieval France give way to the real... więcej >

This publication was written for a Global Political Economy course taught in business schools oﬀering undergraduate or graduate levels of education. The textbook focuses on select countries and regions which, in our opinion, will be the most... więcej >

The monograph illustrates different aspects of profound shifts in the economic, societal, political, and cultural landscapes of Asia. In three thematic blocks, it analyzes the US and the EU’s changing position in East Asia, China’s growing... więcej >

If there is one phrase that is being repeated like a mantra in 2017, it is that “the world is upside down”. During public and private discussions from Warsaw to Prague, Berlin, Brussels, London and even Washington we see a growing sentiment that... więcej >

In this issue we explore the phenomenon of Revolutions which has played a key role in this region for centuries: revolutions. We specifically look at the question as to whether revolution in Ukraine has become a permanent feature of that country’s... więcej >

Dear Reader,“The price of Europeanising the Balkans is much higher than the price of theBalkanisation of Europe,” claims Zagreb-based writer Miljenko Jergović in the openingessay to this issue. This poignant statement calls for wide attention,... więcej >

Dear Reader,Central Asia is an ethnically, geographically and culturally diverse region, coveringa similar land mass as the European Union. Yet, it remains one of the least familiarto the general public in the West. An important region in its own... więcej >

Dear Reader,In the eighth century BC Hesiod complained: “I see no hope for the future of ourpeople if they are dependent on the frivolous youth of today, for certainly all youthare reckless beyond words.” The poet’s words echoed throughout... więcej > 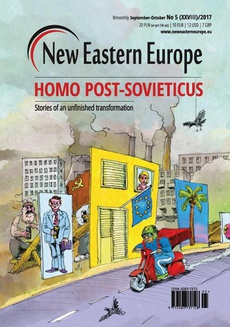