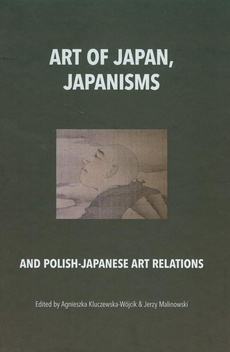 Art of Japan, Japanism and Polish-Japanese Art Relations consists of 48 studies prepared in conjunction with the international conference organized by the Polish Society of Oriental Art (now Polish Institute of World Art Studies) at the Museum of Japanese Art and Technology “Manggha” in Krakow in 2010.

These include analyses of the aesthetic concepts and interpretations of Japanese art history from the Middle Ages to the present. The art of Japan was known in Europe since the 16th century, however, the result of opening of the Empire to the world in 1854 was that the works of art imported to Europe, especially graphics and porcelain, had a decisive influence on the evolution of European art and artistic taste.

Thanks to distinct stylistic features, rules of composition in landscape scenes, genre scenes and portraits – in ukiyo-e graphic, as well as other techniques and principles of decoration – in ceramics and applied arts, European artists gained a new source of artistic and technological inspirations to the major trends – Impressionism, Post-Impressionism, Art Nouveau, Expressionism and Functionalism, forming the basis of art of the 20th century. At the same time, the Japanese artists adapted the “new art” from Europe, changing the canons of their own work in the search for new means of expression – in painting, posters, architecture or film.

Spis treści:
JERZY MALINOWSKI, AGNIESZKA KLUCZEWSKA-WÓJCIK, Introduction; - Japanese and Western approach: KRYSTYNA WILKOSZEWSKA, Art and the arts; BEATA KUBIAK HO-CHI, Taste, sense of beauty, and the cognitive role of Japanese aesthetics; YUMIKO MATSUZAKI, Johakyu 序破急; HIDEMICHI TANAKA, The Classicism of the Nara art (8th century); STEPHAN VON DER SCHULENBURG, Salt dealer Bunshō’s incredible career. Introducing a rare collection of Japanese illustrated manuscripts (Nara ehon) in Frankfurt’s Museum of Applied Arts; TOMOKI OTA, The “export” of artistic crafts through foreigners visiting Kyoto in the modern period; AGNIESZKA KOZYRA, Zen influence on Japanese dry landscape gardens; MAŁGORZATA WOŁODŹKO, The Japanese Garden in Wroclaw – trends in transformations from 1913 to 2005; CHRISTINE M. E. GUTH, Yokoo Tadanori and the rediscovery of Hokusai’s Great Waves; - Past and present: continuity of tradition: JULIA HUTT, How Japanese was the Inrō?; ESTERA ŻEROMSKA, Dashi-ningyō or the dolls on the top of floats in the Kawagoe-matsuri; MONIKA LECIŃSKA-RUCHNIEWICZ, Evolution of Takarazuka stage make-up. From reality to extremity; SVITLANA RYBALKO, Japanese traditional raiment as a modus of Japanese culture; JOHN J. TOOMEY, Searching for Shuko’s “chilled” and “withered” in a global age: the inner dynamics of a modern day tea ceremony; KLAUDIA MORAWIEC, Bizen – traditional Japanese ceramics; MAGDALENA KOŁODZIEJ, Saikokai and the paradigm shift in the appreciation of ceramics in Japan; JOANNA KORYCIARZ-KITAMIKADO, Kintsugi. The Japanese way of repairing china with lacquer and gold; KATARZYNA ZAPOLSKA, The screen with the image of a tiger and a dragon. The technique of workmanship and the conservation; WERONIKA LISZEWSKA, JACEK TOMASZEWSKI, Traditional Japanese methods and European conservation principles in the restoration of the kakemono scrolls from the collection of Asia and Pacific Museum in Warsaw; - Japanese art in the West: GENEVIEVE LACAMBRE, China’s role in the diffusion of Japanese lacquerware; ANNA EKIELSKA-MARDAL, Namban table. A Japanese star of Wilanow historical collection; MONIKA BINCSIK, Japanese art as ethnographic or decorative art: the 1868–1869 Austro-Hungarian East Asia Expedition and collecting Japanese art in Vienna and Budapest; AGNIESZKA KLUCZEWSKA-WÓJCIK, Collecting and promotion of the Japanese art in Poland at the turn of the 19th and 20th century; TOMO IMAI, The collection of Charles Cartier-Bresson (1852–1921) and the Japanese curio market in Paris at the end of the 19th century and at the beginning of the 20th century; ANNA KATARZYNA MALESZKO, A Collection of Japanese cloisonne enamels in the National Museum, Warsaw; KATARZYNA PACZUSKA, Japanese collection of The District Museum in Toruń; MAŁGORZATA MARTINI, Ukiyo-e woodblock prints inspired by the Japanese adaptations of Chinese novels based on the Feliks Jasieński collection; GALINA SHISHKINA, The collection of Shudo Sadamu in the State Museum of Oriental Art in Moscow;- Western visions of Japan: TOSHIO WATANABE, What is Japonisme? Terminology and interpretation; JOHN SZOSTAK, Unexpected reversals: Japanism, Ukiyo-e prints, and their influence on Meiji and Taishō-era Kyoto Nihonga; JERZY MALINOWSKI, Polish and Japanese painting. Relations and parallels (1853–1939); ŁUKASZ KOSSOWSKI, The unique quality of Polish Japanisme; PIOTR SPŁAWSKI, Japonisme at Krakow Academy of Fine Arts (1895–1939) in the context of other examples of Japonisme in art education; EWA MACHOTKA, Kimono and sword: performing Japanese in Galician Krakow; MARKETA HANOVA, Japonisme and Japonaiserie in the Czech Lands (1880s–1920s); JAKUB KARPOLUK, The Meiji no Nihon film collection. Visions of the 19th century Japan captured by European and Japanese early filmmakers; ŁUKASZ MIKOŁAJ SADOWSKI, The Japanese “overseas” architecture in North-East China 1905–1945; GISELA JAHN, Let’s go West: Japanese design invades occidental tableware in the 1930s; - Japan and Poland: modern and contemporary art: TOSHINO IGUCHI,The pioneers of media art in postwar Japan: the avant-garde group Jikken Kobo (Experimental Workshop); NAGISA RZĄDEK, Visual communication in Japanese theater poster: contextual materials for a poster by Tanaka Ikkō; KATARZYNA KULPIŃSKA, Polish and Japanese masters of posters (after 1945) – schools, inspirations, influences; JAQUELINE BERNDT, Images to be “read”: Murakami Takashi’s mangaesque nihonga-like paintings; MAGDALENA FURMANIK-KOWALSKA, Cultural performance in photography of Japanese women artists; AGNIESZKA JANKOWSKA-MARZEC, Young Polish artists inspired by Japanese culture; MAŁGORZATA JANKOWSKA, Silence of the Taming. Transculture project of Andrzej Karmasz as an example of the interpretation of Japanese culture; AKIKO KASUYA, The crack between imagination and symbolism. The exhibition “HANA: the adventure of our vision in interval of reality and a fiction”; JOANNA KUCHARZEWSKA, Contemporary housing architecture in Japan and Poland. Similarities and differences.

This volume is the result of the 10th International Society for Shamanistic Research Conference held in Warsaw 5–9 October 2011. The Conference was organized by: the Polish Institute of World Art Studies, the Institute of Eastern Studies at the... więcej >

The book Art in Jewish society contains a wide spectrum of interpretations of Jewish art in the social and cultural context. The authors of these studies presented the profiles of artists and people of art as well as artistic trends against the... więcej >

THE HOMELESSNESS OF ARTReferences to „being settled” somewhere and being „homeless” have reappearedin various disciplines of the humanities for a long time. Those concepts were usedin different contexts and in different senses. In 20th... więcej >

ARTISTIC ALLERGIESIn its literal application, the term allergy, connoting a reactiondifferent from the customary – from the Greek allos (“different”)and ergos (“reaction”) – is used in the field of medicine. However,in the cultural... więcej >

PERFORMATIVE ASPECTS OF ARTThe concept of performativity has been usually evoked in the discussions onthe philosophy of language and the reflection on theatre and performance art.However, in recent years there have been some attempts to broaden its... więcej >