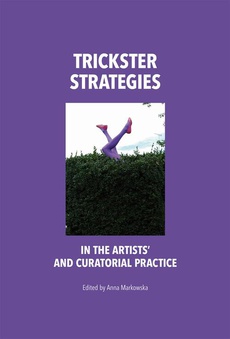 in the Artists’ and Curatorial Practice

Trickster Strategies in the Artists’ and Curatorial Practice consists of 34 studies prepared in collaboration between the Institute of Art History of the University of Wrocław and the Polish Institute of World Art Studies.
A rascal, swindler, jockey, hooligan, or simply a trickster has immense merits in the field of art. In our times, trickster strategies are eagerly used in revealing power relations in post-communist and post-colonial countries. The purpose of this book is not to reconstruct full trickster discourse, from archetypal cultural texts and characters such as Egyptian Seth or Greek Hermes to interpretations of such outstanding 20th century scholars as Claude Levi-Straus or Sigmund Freud (though chapter I History of Trickster. Urban Myths and Events offers elementary stages of a subject), its aim is rather to check how a situation of continuous and deep historical changes affected both art and art narratives (chapter II: Role of Trickster in Post/-Communist and Post-Colonial Countries; chapter III: Outdoor Activism); why a trickster impersonates not only an artist and a curator (chapter V: Curatorial Performances), but even a narrator of a story. The purpose of this book is also a meta-theory – to reflect on art history and on the self-awareness of art historians: how to retell the images we know in a different way (chapter VI: In Between Different Domains and Spaces), and how new narratives enable us to notice something we have ignored before (chapter IV: Trickster and gender).
A trickster does not offer us a universal remedy to a mere academism. But the figure of the trickster efficiently unveils hypocrisy. Not solving any problems, today, tricksters however add fuel to the flames when they participate in various contemporary hot debates. The trickster, as an ambivalent persona, not locating itself beyond the analyzed system, makes us aware of its functioning, its spreading of prejudices and of its value systems.

Politics of erasure. From “damnatio...

Sustainable art Facing the need for...

Organisations are common in everyone’s life. They are everywhere around us, and we are the members of various organisations for most of our lives. We are citizens of a co-untry, we learn in schools and colleges, attend additional courses, play in... więcej >