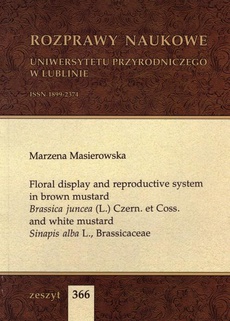 The reproductive success of entomophilous species depends on the floral attractivity and mating system of plants, and the performance of pollinators. Owing to the substancial declie in the number of honey bees, the significance of wild insects as pollen vectors is growing. Lack of the comparative studies on ecological specialization of the floral display in cultivated mustards and effectiveness of their managed and wild pollinators as well as the discrepancies in data on the levels of allogamy and strength of SI system reveal a need of comprehensive studies on the reproductive system in these crop plants. This study aims to investigate: 1) floral and inflorescence characteristics significant to the reproductive system of mustards, 2) the relation of an inflorescence structure to floral display, and to fruit and seed set, 3) the mating system, 4) the pollination performance of managed and wild flower visitors and 5) the flow value of investigated crops for insects.
The studies were conducted on Brassica juncea ‘Małopolska’ and Sinapis alba ‘Borowska’. The flowering phenology, floral display and structure of synflorescence, P/O ratio were studied at both the flower and the individual level. Stigma receptivity was verified by two enzymatic tests and in vivo by artificial cross-pollination. To determine the SI strength and the mating system controlled pollination treatments were carried out. Field experiments using cages were performed to evaluate the role of insects in mustard pollination. Pollinator performance was assessed in terms of their relative abundance and density, flower constancy as well as pollen transfer and deposition. Moreover, chemical composition of nectar was studied using the HPAEC-PAD technique and the histidine scale. The pollen mass available to insects was determined by the modified ether method.
The pattern of flowering of studied cultivars shows a positively skewed distribution with a tendency towards a more symmetrical curve, leading to stable pollinator services throughout the whole flowering period. The flower display size depended on the cultivar and year, and fluctuated during a flowering season. Peak flower opening on the plant started in the 2nd week of the blooming period and continued for 2 weeks. During this period up to 86 and 91.5% of the total flowers opened on the cultivar ‘Borowska’ and cultivar ‘Małopolska’ plants, respectively, with the daily portion up to 6.1 and 8.6%. Mustard flowers are arranged in polytelic synflorescences, with racemes as the basic flowering units (florescences). Racemes are organized at main axis (MF), lateral axes and paracladia (Pc). Among-florescence and among-axis variation in abundance of flowering, fruit set and seed set was elucidated. The flower number/florescence as well as the fruit set and seed number/fruit decreased with increasing ramification order and for axes developing at the bottom of a synflorescence. In both mustards, the majority of flowers and subsequently fruits on the plant were produced by the MF and florescences on Pc of 1st and 2nd order. Mustard flowers exhibit incomplete protogyny. The P/Os values show that both cultivars are facultative in their reproductive systems. Results of pollination treatments reveal that cultivar ‘Małopolska’ has a high level of SC and facultative autogamy, whereas ‘Borowska’ is facultative xenogamous with partially effective SI (PSC). In cultivar ‘Borowska’ both the fruit set and seed number/flower decreased considerably after geitonogamous pollination, whereas in ‘Małopolska’ a lower mass of selfed seeds compare to that of outcrossed seeds was stated. The fruit set was highly correlated with both the seed number/flower and seed number/fruit. In cultivar ‘Borowska’ fruit set showed a positive correlation with seed weight, indicating that pollination treatments that produced numerous fruits also formed heavier seeds. The absence of insects decreased the total number of fruits set on a plant ( 1.5×) and seed number/fruit (up to 1.7×) in both cultivars. Isolation from insects also decreased the fruit set by 10.7% in cultivar ‘Borowska’. The key pollinators were honey bees and solitary bees from the families Andrenidae, Halictidae and Megachilidae. Although honey bees did not differ significantly in their ability to deposit pollen grains on stigmas when compared with other bees, they exhibited higher levels of floral constancy and visited mustard flowers with higher intensity. In B. juncea ‘Małopolska’ solitary bees were equally efficient pollinators in terms of their daily activity pattern and flower constancy. The pattern of daily activity of flower visitors was associated primarily with the opening of new flowers and well correlated with floral rewards availability. Nectar of both cultivars is hexose-dominant with maltose, trehalose, erlose and sorbitol content. The pattern of AA content in nectar was age-dependent. Mustard flowers offered substantial amounts of pollen for visiting insects. Estimated pollen yield per unit area ranged from 48 to 85 kg·ha-1.
The main factors determining the distribution and size of flower display in mustards, are the structure of synflorescence and envintonmental conditions. A mixed mating system appears to occur in both investigated mustards and the weakening of SI system in S. alba is proved. Mustards are adapted to pollination by short-tongued bees and flies, but as cultivated crops they have been ‘infested’ by honey bees. The alternate pollinators are wild solitary bees. They have the potential to replace services provided by honey bees if multi-directional practices increase their population sizes to levels resulting in the flower visitation rates as high as A. mellifera. The obtained results are of practical importance when applied in the breeding and cultivation protocols for mustards. They can also be used in apiculture.

Interactions between host plants and Coccus...

And Still I Cheat the Gallows

A series of stories telling about the graceful crimes of a high class robber, a forger, a robber, a murderer. Stories in each of which are the same criminal, but under different names travels around the world, assuming new identities, avoiding... więcej >

Learner`s Dictionary for Student and...

e-ISBN: 978-83-233-8439-7European Union as a whole. Public health professionals have to cooperate across borders, using mainly English as a means of both face to face communication and information dissemination. As a resułt, there has been a... więcej >

Journeys and Travellers in Indian Literature...

The present publication is one of the outcomes of research cooperation spanning two decades in the field of Indian literature and art between the South Asian Studies centres of five academic institutions: University of Milan, Charles University in... więcej >