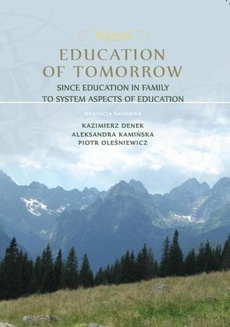 Contemporary post-modren family as the "family of risk" The contemporary family is a post-modern one. Unfortunately, it is frequently a dysfunctional family which fulfils its basic roles (bio-psychical, economic, socio-determining, socio-psychological) with great difficulty or in a “distorted” way. Such a family, called by D. Elkind the “permeable” family,lacks clarity and stability as to the number and “quality” of parents, the formal type of their relationship, as well as the division of e.g. economic or socio-psychological functions. The modern family is a family implicating differences in the quality of child¬hood. On one hand, modern families are sometimes affected with unemploy¬ment, often connected with social and economic poverty, which in turn frequently involves deviant or pathological behavior (e.g. alcohol abuse). Children from such families tend to be “low quality” children (homeless children, poor children, children of the streets). On the other hand, the modern family is characterized by permanent time shortage; overworked family members are oriented towards success, career, self-realization. In success-minded families children are also brought up to achieve success; they are under pressure to “win” and are put on the path of excessive ambition. “It is such parents who pack their children’s timetables with ballet and fencing classes, football and Spanish, regardless of whether the child actually likes it all or not, because it looks good in the CV which is to secure them a place in the best schools and a job in the best corporations.” Children from such families are called the “high quality” children or “consumer children” who function according to their parents’ plan. They are often provided excessively with materialistic values that sometimes distort their lifestyles. The modern family is also more and more plagued with divorce, conflict, Euro-orphanhood. It is characterized by the constant necessity to adapt to changing con¬ditions and to undertake new, often burdening and stressful tasks and duties. As a result, the modern family is predominantly threatened by: • relationship crisis evoking the category of “de-anchoring process”, i.e. the breakdown of emotional bonds between parents and children and the remaining family members; • family disintegration resulting from divorce, conflict, or economic migration of one parent or both parents and their living abroad; • child neglect stemming from various reasons (poverty, unemployment, parents’ job-related mobility); • loneliness of children (caused by parents’ divorce, Euro-orphanhood, poverty, parents’ preoccupation with professional careers in well-off families); • pathologies of family life (alcohol abuse, drug abuse, etc.); • eroding the authority of parents, sense of being lost, confusion of both children and adults in relation to the system of values; • depriving children of their natural need of security and the resulting distortions in shaping their personalities. In the contemporary post-modern family, especially the one that functions in the hectic rhythm of everyday modern life, self-reliance is often imposed on children; “children are treated as competent in coping with life challenges, as not needing support.” The picture of the modern family sketched above, giving rise to many unsettling reflections, should be complemented with the characteristics of “supermodern child” in a modern society as given by the German sociologist U. Beck. These are: • the necessity for the child to adjust to a new form of family life, without one parent or both parents; • the child’s considerable self-reliance – his or her reflectiveness through partici¬pation in domestic duties; • the child’s ability to co-ordinate – independently of the parents – various types of activity, arrange timetables for his or her leisure time and find his/her own time rhythm separate from the family rhythm; • development of own spectrum of activities by the child, especially during parents’ absence; • life on “island (island areas)” and arranging own complex social relations by the child (friendship or group relations); • increasing independence in shaping the child’s own biography (course of education, course of life), developing and integrating one’s life history in a reflexive manner; • lack of choice of e.g. the child’s family situation; this necessitates the development of self-agency adequate for the situation; • aspiration to meet the expectations of adults. This considerable self-reliance accentuated in the above-presented features of the “supermodern child” has got its advantages but also involves certain threats, such as degeneration of family bonds, loss of traditional authorities, the child’s loneli¬ness, confusion in the criteria used for determining values and in the rules of social intercourse, non-fulfilment of the child’s needs connected with health, psychology and intellectual development, sometimes also material needs. The blocking of such needs also happens for the previously mentioned reasons, such as parents’ unemployment, poverty, divorce, prolonged absence from home due to professional mobility, or loosening of family bonds in both wealthy and poor families. Deprivation of the above-mentioned needs brings in the states of frustration and stress, whose consequence is the occurrence of strong emotions in children: fear, anxiety, anger, and also physiological changes, somatic distress, troubles with concentration, apathy or aggression, most often displayed towards peers. It should also be mentioned that aggressiveness and initiating interpersonal conflicts by children may be a symptom of their abuse in the family. There is a proven connection between the phenomenon of child abuse and the functioning of a family in certain social conditions. Unfortunately, post-modern reality often “opens the door wide” to physical and psychical harm and neglect and other forms of violence towards children. The generally recognized perspective of understanding child abuse in the family indicates that such phenomena and social problems as unemployment, poverty, difficult socio-economic conditions, early parenthood, problems with addictions, excessive expectations weaken the quality of parenting and increase life stress considered to be the primary risk factor for the child abuse problem in the family. In the context of the outlined characteristic of the post-modern family it seems right to call it – after S. Kawula, J. Brągiel and A. Janke – the “family of risk” or “dangerous family.” Realizing the difficulties that the modern family must cope with we should ask ourselves the question what should be done to transform it into the “vital family,” i.e. the one fulfilling the needs of all its members, activat¬ing their abilities and offering chances of self-realization. Małgorzata Cywińska