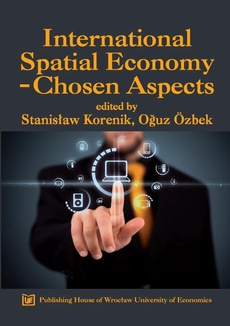 The economy at the beginning of the 21st century is increasingly becoming a global economy. This fact entails different consequences for countries, business units, or indi-viduals. At the same time, rapid advances in technology and the use of the achievements in the practice are changing the living conditions of entire societies. The period which now exists in the economy can be defined as a permanent innovation that enters by diffusion into all areas of socio-economic life. As a result, new services and products are introduced, changing fashions, tastes and preferences. This leads to the dynamic changes in the modern world. These changes are cumulative, and for the average per¬son they are often confusing, on the one hand, and very tedious on the other. It is claimed that only constant learning gives people a chance to adapt to these changes.

In the context of these general observations the role of space in contemporary realities should be highlighted. On the one hand, with the development of means of communication the space has ‘shrunk.,’ On the other, thanks to the development of communications infrastructure we have got to know its diversity. It turns out that the space is not only the element of nature (animate and inanimate), but also people with their culture, both material and spiritual one. Anthropogenization of space is a reality and must be reconciled; however, these changes should be made in a thoughtful and rational way. This contemporary space is becoming a major-elect of the economy.

This book is an attempt of the description of this knowledge. The authors set themselves the task to bring closer to the reader the contemporary socio-economic space, including cultural and political determinants occurring in the space. Therefore, in the text, except for general information relating to the overall basic human activities in space, we find contents concerning the newest forms of management, innovations and creation of the economic networks, etc. According to the authors, such an approach is to bring closer to the reader the knowledge necessary to know the framework for the functioning of the economy in the new reality, not forgetting the spatial aspect, as each human activity has its place in the time and space. We cannot live out of the time and out of the space.

The authors would like to thank reviewers for valuable comments which contributed to the improvement of the quality of the publication.

International Business in the Global World

In the 21st century, globalisation processes and the accompanying liberalisation of the flow of factors of production, information and ideas, driven by the development of technological innovations and information technologies, have become an... więcej >

International Journal of Food Science and...