The investigations on the mystery of science and its personal knowledge of uncertainty, as the poet Kabir – the master, used to say: “When you have knowledge, you use a torch to show the way. When you are enlightened, you become a torch.” Education as a science of it, and at the same time as a social practice, often called the art of: care, teaching, learning and education – recog¬nized from the culture side, has a profound meaning. The reason is such, that because education in its cultural tradition – sometimes in some countries – in relation to the cultural archetypes, struggles to keep up with progression of civilization. It is not just about the bit civilization, when in the perspective of a few years, there can be a qubit one and the quantum mind.
“Education of tomorrow” is seen primarily as the art of making decisions based on the results of educational research and the related social sciences, including their search for changes in the area of cultivation of existing and new forms of adult education. It is true that it raises both hope and concern for education, because the matter is in the hands of the decision-making political bodies in the country and the European Union, on the other hand, you cannot fail to note that education needs large financial and human resources.
If scientific writing is so important in educational research, it is worth to return to the question: “What is it, that we call science?” We then have to deal with considerations about the nature, status and methods of learning in terms of the introduction to contemporary philosophy of science. In “Education of tomorrow” this will be the very reminder and the thought leading the collection of articles in this English-language monograph.
Well, in the area of the proposed substantive and methodological theses, there are: induction, inductionism, the dependence of observations from the theory, falsification of ideas, theories of the structure, rationalism and relativism, as well as objectivity – also in terms of changes in the theory in physics, anarchistic theory of knowledge by Feyer bend, truth, realism, in-strumentalism and non-representational realism.
Scientific writing of pedagogists and students can be difficult, e.g. in reach¬ing the philosophical issues of science, so one should pay attention to them, even from the point of view of the critical analysis. In general, it is all about finding valuable cognitive and utilitarian values, as well as declared attempts of application of teaching paradigms in university education, in these unique articles. This raises substantive and methodological interest in issues related to threats to the autonomy of student learning and issues related to the future of professional students and attractiveness of selected fields of study.
Among most interesting we find the opinions of students on early child¬hood education, also in the area of student participation in culture andearly education. This is a valuable research report and descriptive-analytical presentation of early childhood education teacher – a guide to the world of education of the child. The issue of physical activity and other forms of spending time off, are raised by Czechs and Slovaks, who pay attention to an important aspect of scientific research and form valuable suggestions and proposals for the wider physical culture.
Inquiring on the contents of this English-language collective monograph, it is worth noting that pedagogy, as a science and social practice, is increasingly perceived as an art of education. Binding to the motto of D. de Kerchhove, we note that in terms of the cultural skin of science, art and education, and in the electronic civilization, cultural goods are sold, including information or data, but knowledge remains an individual resource. Cases of adults for adults, their functions established and implemented for children, youth, seniors, people with disabilities, are all primarily involved in the so-called operational con¬cepts. They are related to the fact that the adult is a person who is formally and legally responsible for themselves, but also is able to satisfy their mate¬rial needs, including biological, social and selfish ones. Meanwhile, the thing that is worrisome, is there are more and more adult children of their parents, or even grandparents dependent grandchildren. Could such an important re¬search problem, next to the increase of suicides e.g. in Poland, not find a solu¬tion on the canvas of interdisciplinary research, e.g. in the LLL?
Science is created, disseminated for a specified price and implemented to practice, the pedagogy and allied sciences, all are victims of their own success, because the world is changing and severely judges their creation and use in terms of confirmation. Supposedly scientific news are easy to both create and criticize, bout one should appreciate the difficulty of changing the world, es¬pecially in the sphere of cultural archetypes and education for innovation and creativity. Therefore, we should all find it worth to look into the essence and meaning of statements about the pedagogy practiced in the “Education for tomorrow,” because “science still gives hope for the future. It indicates a lot of new ways of understanding and coping with the problems threatening us. In fact, we can only keep alive the development of scientific knowledge” in itself and for itself, in an individualized society.
In summary, I encourage the readers to deeper reflection and interpretation of the content contained in this collective English-language monograph, be¬cause, in fact it contains the ideological premise of “Education of tomorrow” as the goal and objective, all while the traditional cultural skin disappears and we become the individuals in science and life of every day. 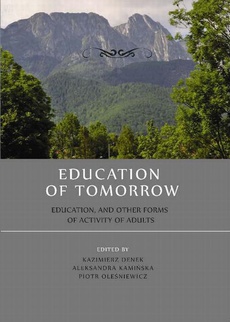