Who is afraid of Phrasal Verbs: the case of a learner corpus

Chapter by chapter, PV structure and semantics are discussed and analyses performed. Also, corpus linguistics is called for as the framework, within which the study is performed. Particular attention is paid to the Polish part of the LINDSEI corpus (Louvain International Database of Spoken English Interlanguage), as the source of linguistic evidence. Semantic analysis of the extracted PVs based on the notion of compositionality (see Celce-Murcia and Larsen-Freeman 1999; Armstrong 2004) constitutes the main part of the empirical chapter. The analysis was possible thanks to an important asset of this book, namely the POS-tagged PLINDSEI corpus. POS-tagging enabled the verification of the study by Kamińska (2005) because it automated the process of extraction making it reliable at the same time. It needs to be stressed that for spoken learner data to be POS-tagged with high accuracy, the CLAWS tagger (Garside 1987) needed to be trained. The result is a POS-tagged corpus with 98.5% accuracy. Following the findings, assumptions about the low use of phrasal verbs by learners are pointed to. In order to remedy learners' avoidance of phrasal verbs, a new way of PV presentation in popular English coursebooks is suggested.

The research questions posed are the following:

A Diachronic Grammar of Old English

Who Killed the Husband

Mappin is a wealthy New York criminologist and author who is highly valued by the police and high society. He participates only in those crimes that really interest him. And in ’Who Killed the Husband’ he investigates solely because all the... więcej >

Człowiek, który był. The Man Who Was

Rynek książki w Polsce 2015 Who is who 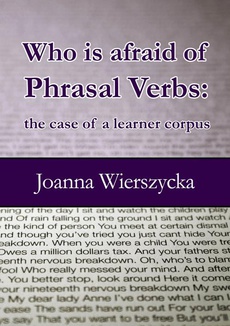 Who is afraid of Phrasal Verbs: the case of a learner corpus