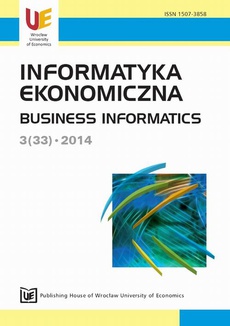 The series was initiated in 2001, and each year a new volume is published. The purpose of this initiative has been the popularization and dissemination of research results in the area of business information systems. To effectively support long-term management processes, information systems must relate to current models of conducting business initiatives and their development directions as well as supporting the latest information technologies. Such solutions are desired by managers, information system developers and stakeholders.

The first volume contained only articles written by researchers and Ph.D. students of the Department of Informatics at Wrocław University of Economics, Poland. In the years 2002–2006, the publication was given national character linked with National Scientific Conferences under the same title as the monograph series. Since 2007 all papers have been published only in English to disseminate this series in foreign countries. As a result, the scope of the monograph has been extended and the publication has gained a kind of “added value.”

This year the volume of Business Informatics continued the convention of providing researchers as well as practitioners with an opportunity to present new results of Information Technology applied in business and management, and to discuss current achievements and applications. The papers present various viewpoints of Information Technology, perspectives and research results derived from diverse concepts and scientific foundations. The AITM’2014 had second the highest number of submissions since 2007. The acceptance rate of 42.11% is an indicator of the quality of the papers presented at the conference are included in this volume of Business Informatics.

The list of authors includes a large number of scientists from Polish universities as well as practitioners from consulting and integration firms. As each year, a large number of papers were submitted by Polish authors representing two leading universities of economics from Poznań and Wrocław. This year our volume also contains articles written by researchers from Bulgaria (Bulgarian Academy of Science, Institute of Information and Communication Technologies, Sofia), Germany (Technische Universität, Dresden), Macedonia (Military Academy “General Mihailo Apostolski” and Ss. Cyril and Methodius University, Skopje) and the United States of America (Georgetown University, Washington, DC).

The publication of this volume has been linked with the organization of the 12th Conference on Advanced Information Technologies for Management AITM’2014 (Warsaw, September 7–10, 2014), thus allowing for yet another presentation of ideas, concepts and IT applications to a wider audience. All papers were in this volume were presented during the AITM’2014. It should be noted that the AITM’2014 was one of the important events of the Federated Conference on Computer Science and Information Systems FedCSIS’2013, which was attended by over 350 registered participants representing 45 countries from all over the world.

We want to address special thanks to the FedCSIS’2014 organizers – Leszek Maciaszek, Marcin Paprzycki and Maria Ganzha – without their hard work and continuous support, it would not have been possible to have such a great conference. Finally, we would like to thank all the members of the program committee for their quick and thorough work. Particularly, special thanks are due to the authors and the reviewers for their insightful and critical evaluation of all articles.

We kindly invite all participants, authors, readers and reviewers to visit the webpage of the FedCSIS/AITM (http://fedcsis.org/), and of course, to participate in the 13th Conference on Advanced Information Technologies for Management AITM’2015, which is to be held in Łódź, Poland, September 13–16, 2015.

Informatyka a filozofia. Od informatyki i...

The subject of development and implementation of ICT is a source of many scientific considerations. At the same time, investing in modern ICT solutions is one of the connections of organizational improvement directions. Therefore, the subject of... więcej >

In the modern world, where information and knowledge are key resources, the process of computerization is the basis for the development of societies within modern forms of management. This is related to the dynamic development of technologies that... więcej >

This volume of Business Informaticscontains extended versions of selected papers accepted at the 10th Conference on Advanced Information Technologies for Management AITM’2012. This is also the twelfth volume in the series of monographs entitled... więcej >