Selected Medieval and Religious Themes in the Works of C.S. Lewis and J.R.R. Tolkien

Preface
(fragment)
It is perhaps trivial to say that the personalities and works of J. R. R. Tol kien
and C. S. Lewis evoke rather extreme feelings in audiences. Sometimes
these emotions are those of deep admiration and fascination, and
sometimes, though much less often, those of disgust or even contempt.1 It
is, however, easy to see that sometimes they hardly incite any feelings at all
because it certainly is not true that one must feel strongly about these two
famous and popular, but hardly “canonical” English writers, who happened
to be friends and to have shared much of their life experiences together.
As writers, they both can be described as providers of niche products,
interesting for fantasy literature buffs and, particularly in the case of
C. S. Lewis, for Christians, particularly committed Christians. The latter
once were a majority of the Western consumers of culture, but, already in
the days of Tolkien and Lewis, they became, at least in Britain and in many
other places in the West, something of an embattled minority. At that time,
the majority of the population consisted of people with hardly any religion,
or of lukewarm Christians. If we try to ask ourselves why Tolkien and
Lewis are, occasionally, so much disliked and shunned, we might end up
with some rather obvious answers. They certainly are seen as profoundly
old-fashioned, or even reactionary, since they hardly belong to the epoch of
the 20th century Modernism (or Post-Modernism) with which they seem to
be associated purely by a chronological coincidence. Indeed both yearned
for rather distant epochs, and heartily disliked the modern industrial and
technological civilisation. On the other hand, it is also possible that sometimes both Tolkien and Lewis
exaggerated the extent of their own conservatism, while being aware that
this manoeuvre may have cost them a lot in terms of popular support. In
one of his most famous texts, the lecture called De Descriptione Temporum,
Lewis talks about how great an experience it would have been for a
paleontologist to meet a live dinosaur, or for a student of Classical Greek
drama to meet a live Athenian from the times of Sophocles. The point is
that he defi nes himself as an “old Western man”, that is a specimen of the
cultural formation that disappeared, according to him, around the year 1820,
with the onset of the age dominated by science and machinery. He mentions
Jane Austen and Sir Walter Scott as some of the last representatives of this
Old Western culture:
Ladies and gentlemen, I stand before you somewhat as that Athenian might
stand. I read as a native texts that you must read as foreigners. You see why
I said that the claim was not really arrogant; who can be proud of speaking
fl uently his mother tongue or knowing his way about his father’s house? It is
my settled conviction that in order to read Old Western literature aright you
must suspend most of the responses and unlearn most of the habits you have
acquired in reading modem literature. And because this is the judgement of a
native, I claim that, even if the defence of my conviction is weak, the fact of
my conviction is a historical datum to which you should give full weight. That
way, where I fail as a critic, I may yet be useful as a specimen. I would even
dare to go further. Speaking not only for myself but for all other Old Western
men whom you may meet, I would say, use your specimens while you can.
There are not going to be many more dinosaurs.2
Thus, Lewis consciously represented himself as “old-fashioned” in quite a
literal sense of the word, that is as somebody whose mind was fashioned
a long time ago, or rather fashioned by cultural products of what he calls
Old Western age. Naturally, we have the right to treat this dinosaur rhetoric
with a pinch of salt, because there may be in it an admixture of the natural
desire of a middle-aged professor to appear more interesting in the eyes
of the students, or even in his own eyes, but, on the other hand, there is
little doubt that C. S. Lewis was steeped in old literary texts in quite an
amazing degree. He was not, at the same time, what one might call “a
natural dinosaur” because his love of old literature can more rightly be
called an acquired taste rather than a continuation of a family tradition.

Tourism and the transformation of large...

Selected Model Based Architectures and...

Amber’s Mirage (1929, For thirty years old, Jim has spent the search for the mythical „Amber’s Mirage” without finding him. Tsu is a sad story about how his young teammate left the house, loved a woman and went to look for a bright rock over... więcej >

The Soul Of A Regiment(Adventure, February 1912) SO long as its colors remain, and there is one man left to carry them, a regiment can never die; they can recruit it again around that one man, and the regiment will continue on its road to future... więcej > 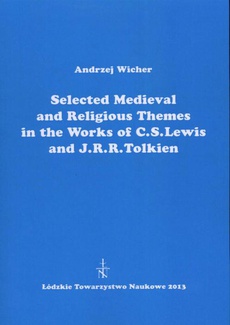 Selected Medieval and Religious Themes in the Works of C.S. Lewis and J.R.R. Tolkien